Born January 25th, 1904 in Amsterdam. In December 1942 he was sentenced to death by the Fieldgericht in Utrecht. On 2nd August 1943 he escaped from the police station at Vught.

After the war he wrote a column for Het Parool under his alias. He was chairman of the Foundation Het Parool until 1956. In the autumn of 1945 he became a member of the emergency parliament.

He remained a member of the second chamber of parliament until 1972. 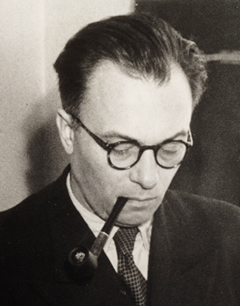