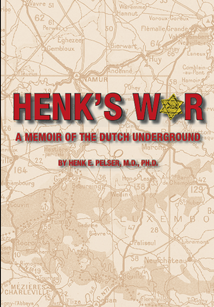 Henk’s War: A memoir of the Dutch Underground

This is a story of daring, of ingenuity – and of a searing contempt for the jackbooted Germans who overran The Netherlands in May 1940. As the long years of the German Occupation began, the Dutch royal family and their advisers escaped to Britain. Rather than join the Allied Forces, Henk Pelser, a young medical student, decided to stay in Amsterdam and fight the Nazi’s on his home ground.

Joining the resistance, he began by smuggling copies of an underground newspaper and ended by smuggling Jews and others sought by the Nazis across the Netherlands, through Belgium and France, to eventual safety in neutral Switzerland.

The underground escape line he set up saved the lives of scores of people. Pelser himself was captured and after serving time in prison was sent to a prisoner of war camp. But his story did not end there. As the Second World War drew to a close, Pelser found that his Jewish girlfriend, who he had feared dead in a Nazi concentration camp, was alive. So this book is a love story too – because alone in an alien country he found her, nursed her back to health, and brought her home.

This is the story of Henk’s War.